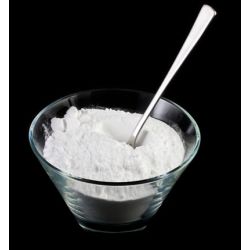 Sodium borate is a colourless, crystalline powder. It is the mineral salt of boric acid. This inorganic salt has been used in the cosmetic industry since the 1900s. It was once used to give semi-permanent curls to the hair. It can alter a product’s pH, act as a preservative and soften water. In bath salts, it is a mild detergent.

We use sodium borate in formulas with beeswax. These compounds react with each other to form a water-in-oil emulsion. This neutralizes the sodium borate and effectively leaves none of it in the final product.

The cream that is then formed has a rich emollient texture because of the effect of the beeswax. It deeply softens the skin and lifts dirt away from the surface, leaving it clean and soft. This is essentially a cold cream, akin to the Greek physician Galen’s in the second century.

Galen’s cold cream mixed beeswax and olive oil with water (or rose water) beaten into it. Because it cooled the skin, it became known as cold cream.

Borax was added to the basic combination of ingredients at the end of the nineteenth century. It reacts with fatty acids in the beeswax to form an emulsion and makes the cream stable.

Our Ultrabland cleanser follows the basic principles of Galen’s cold cream. The emulsion melts onto the skin, loosening and picking up dirt and dead skin cells. This is an incredibly gentle way to cleanse the skin and will not irritate skin or destroy its natural protective barrier. In Ultrabland, we've used beeswax, borax, peanut oil and rose water as the basic emulsion, and we’ve combined it with glycerine and fresh iris extract to get the cooling, gently cleansing effect Galen pioneered.

We have used sodium borate in our range of lip balms to form an emulsion with beeswax, creating a protective barrier on the lips. Our Whipstick, Lip Service and Honey Trap lip balms all contain sodium borate.