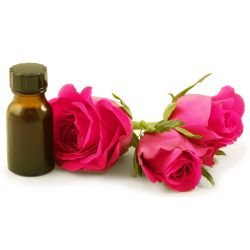 Our rose oil comes from the damask rose (Rosa damascena, from the plant family Rosaceae), which grows across Bulgaria, Turkey, Russia, India and China. Other rose species can be used to produce rose oils and absolutes.

Rose oil is also sometimes described as rose ‘otto’ or ‘attar,’ which comes from the Arabic word ‘utur,’ meaning perfume. Rose oil is extracted by steam distillation from the flower petals of the plant. It is more expensive than the absolute because steam distillation yields less oil. It is olive green and smells of sweet roses.

There are around 300 constituents in rose oil, but some of the main ones are citronellol, geraniol and phenylethyl alcohol. This means the oil has a complex aroma and many interesting properties.

Rose is said to have been the first floral essential oil to be distilled and has been important in fragrances and flavours for thousands of years. Rose oil has been highly valued throughout history.

Aromatherapists recommend it for depression, sadness and grief. It is also believed to have a general balancing effect on emotions.  Roses have been used medicinally since ancient Greece.

This oil is also sometimes called the ‘fertility oil’ and is considered an aphrodisiac. At the same time, the scent has been an ancient symbol of love and innocence.

In skincare, it has been favoured for mature skin. It is also used as a general skin tonic for all skin types, but particularly for rough, dry and irritated skins. It has been traditionally recommended for anyone suffering from the high colour caused by thread veins.

We have used rose oil in our Turkish Delight smoothie and Sex in the Shower emotibomb for its beautiful perfume and aphrodisiac effect.