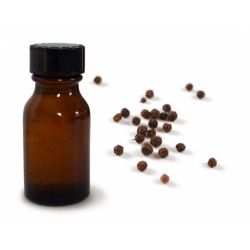 Native to Asia, this woody plant climbs as high as 20 feet in the wild, with spikes containing up to sixty berries. These are harvested, unripe, at full size, and dried in the sun to develop both flavour and colour. The blackening occurs due to enzymes in the berries and the outer surface becomes wrinkled.

Pepper has been among the most important spices used around the world for thousands of years. Initially, it was used medicinally and later added to food for its flavour. Black pepper has a distinctive aroma and an intense taste.

Historically, pepper was valued to aid digestion and cause sneezing. Clinical trials have shown that the main constituent, piperine, acts as an anti-inflammatory, inhibits parasites and can protect the liver.

The oil is extracted from the berries of this plant by the method of steam distillation. It is usually colourless to pale green and has a spicy and sharp peppercorn smell. It is a warming oil with stimulant properties. It can be an irritant in large quantities, so our inventors use it with great care.

Black pepper is a popular perfumery ingredient and we use it in our Breath of God fine fragrance to add warmth and clarity. We use it for the radiating potency of the oil.