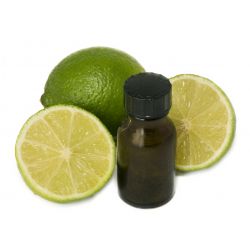 The citrus aurantifolia tree, with its shrub-like appearance, pale green oval leaves, spiky branches and clusters of white flowers, is probably native to tropical regions of Asia. It is now widely grown in other tropical and subtropical areas of the world, especially in Brazil, Mexico and the West Indies.

Its edible fruits are commonly picked when green and unripe - and are higher than lemon in both acid and sugar content when harvested this way. If allowed to ripen, they lose almost all of the acid content, turn yellowish and very sweet.

Traditional healers in the tropics have used lime, its flowers, juice and pulp for centuries; particularly for insect bites, external infections, to cool the skin and added it to herbal teas and infusions for internal use as a decongestant – and to fight infection and intestinal complaints.

Limes are a good source of vitamin C and are known as an effective antioxidant when eaten and when applied topically. Lime peel is candied and made into sweets in some countries, but it is also a source of the valuable lime essential oil. Lime oil is used as a flavouring agent in food and when added to cosmetics, it is said to improve circulation and mood.

Lime’s beautiful, uplifting fragrance is valuable to perfumers as the whole oil, but the isolate citral, which is obtained from the oil, is sometimes used on its own or to enhance a citrus scent.

Lime oil has a sharp, fresh, zesty scent. As with all citrus fruit, this fragrant oil is considered a top note, which means it evaporates first and it is therefore the first note that your olfactory system picks out of a blend. We have used lime oil in our You’ve Been Mangoed luxury bath melt and Each Peach (And Two’s a Pair) massage bar as part of their uplifting fruity fragrance.

Lime oil has been shown to be excellent at keeping bacteria at bay, which makes it useful for maintaining healthy skin. Our Enzymion moisturiser has lime oil for its astringency.

Lime oil is a popular ingredient in remedies to combat congested skin, cellulite or simply to wake you up! It is often recommended for acne and for oily skins. We have used lime oil in our Ocean Salt face and body cleanser and Sea Vegetable soap for its zesty perfume and antioxidant quality.

Lime oil has been traditionally used as an astringent and stimulating skin tonic in herbal and aromatherapeutic skin preparations.