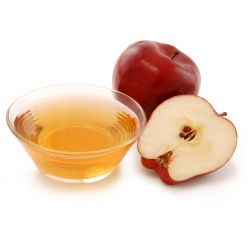 Apple (pyrus malus, malus sylvestris) is the most popular and widely cultivated temperate-zone fruit tree. It belongs in the Rosaceae family and is thought to have originated in Western Asia and Asia Minor where carbonised apples dating from 6500 B.C. have been found.

In Celtic legend, the apple tree was one of the magical fairy trees and symbolised immortality. The druids would even forge wands from its wood due to the mystical nature of the tree. Certain medieval narratives call Avalon ‘The Isle of Apples.’

Apples have hundreds of culinary uses from jellies to juice. In medicine, their disinfectant and other therapeutic qualities are highly valued, and the fruit can be beneficial for teeth and gums, when eaten raw. Studies indicate that the old saying, “an apple a day keeps the doctor away,” may actually be true. It’s been found that eating apples daily can help to reduce skin diseases, arthritis and various respiratory problems.

Fresh apples are approximately 85% water, which explains their refreshing taste. Containing vitamins A and C, they are high in carbohydrates and are an excellent source of dietary fibre.

Apples are a natural source of malic acid. This is a colourless crystalline compound used as flavouring in foods, such as sour confectionery and in the ageing of wine. It is also used as an antioxidant and is an important alpha hydroxy acid (AHA) ingredient in cosmetics.

AHAs have become important ingredients in cosmetics. Ancient uses date back as far as the tales of Cleopatra bathing in asses’ milk, which would have been rich in lactic acid. Moderate percentages of AHAs have been added to commercially available cosmetic preparations since the popularity of professionally applied acid peels rose in the 1980s.

We take fresh apples, squeeze and juice them.

We have used this fresh apple juice in our nourishing Skin Nanny moisturiser to take advantage of the natural content of AHA in the fruit. The malic acid will gently remove surface dead skin cells to refresh the appearance of the skin.